The Growth Mindset Debate: Does It Work? 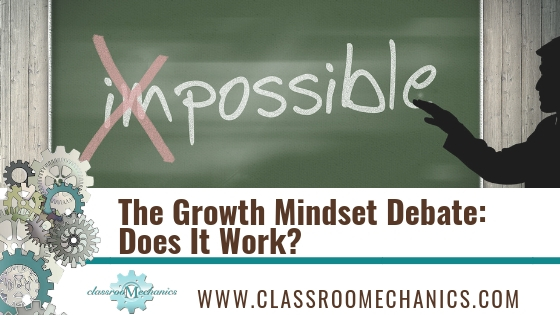 Many in the education field are familiar with Stanford Professor Carol Dweck’s notion of instilling in children a growth mindset, that is a belief that their intellectual abilities can be developed through effort and practice. Recently, some researchers have challenged her work claiming that further analysis indicates that growth mindset interventions are not particularly effective. So, what is an educator to believe? Should we be spending the time and effort for this or is it just another oversold educational reform that will disappear in time like so many others?

If we take Dr. Montessori’s approach to this situation and follow the child, what do we get? We know from neuroscience research that brains, particularly human brains, have neuroplasticity, that is, the ability to adapt and change based on experience by growing new connections between neurons. This process is the fundamental basis for learning, or in other words, we would not be able to learn anything without it. We know that we can change the brain through education, or scaffolded experience that leads to understanding and mastery.

In addition to this notion of changing brains, neuroscience tells us that children’s brains are the most plastic or malleable and that there are sensitive periods for acquiring certain skills, such as speech. While brain plasticity continues throughout life, children have the easiest time learning new material, and we consider the brain not fully developed until around age 25. After this point, brain plasticity is reduced, which means that people can still learn new material, but not as quickly or effortlessly as children.

The Role of Mindset

So how does Dr. Dweck’s Growth Mindset theory factor into this? Mindset theory tells us that what people BELIEVE about their abilities plays an essential role in learning. Essentially, if they do not think they can learn something, they won’t make the effort, and it becomes a self-fulfilling prophecy. They then fall prey to confirmation bias and when they encounter difficulty with a task, they give up thinking it confirms their aptitude for a task. However, if they are introduced to the idea that brains can change, new skills can be developed through effort and practice, and difficulty just means they need to keep trying, they persevere and their academic achievement rises.

Olympic skater Michelle Kwan did not expect to perform a triple axle the first time she was shown, she had to develop her skills through effort, deliberate practice, and A LOT of falls. Unfortunately, a lot of traditional schooling practices and societal messaging programs the fixed mindset into students, sending the message that students should be able to learn quickly and effortlessly and if they can’t, it is a reflection of their ability.

Many people fall prey to the idea of overnight sensations, the wunderkind who comes out of nowhere to transform a field or artistic form. However, what we seem to ignore or don’t acknowledge are all the years the higher performer spent toiling in obscurity to make their breakthrough. This does a great disservice to our children and perpetuates the idea of innate abilities and a fixed mindset.

At its core, then, Mindset Theory is about students’ belief in their ability to change and grow, which we know from neuroscience is built into the human nervous system. What is in question is HOW to encourage children to make the sustained effort that it takes to learn new and difficult material. Dr. Dweck’s answer lies in changing students’ response to academic adversity. Rather than concluding that they are just not good at “Subject X” and being resigned to that fact, children should recognize their inherent ability to grow and change through deliberate practice. They also need to recognize that struggling is a normal part of the process of learning anything new and is NOT an indication of their abilities. In other words, do they see the adversity as an opportunity for practice, or as an judgement about their talent.

The Answer to the Validity of Mindset is YES!

The answer to our question about the efficacy of trying to help children develop a growth mindset is YES, it is worth time.

The controversy is really about HOW to do so or in other words, what methods are most effective. Unfortunately, determining the HOW is complicated by the many other factors that impact beliefs in abilities, such as home environments, social emotional factors in the classroom (e.g. the sense of belonging and trust), how well the curriculum has been scaffolded into a logical sequence (something the Montessori method does VERY well), the effects of trying to shepherd a cohort of children of differing backgrounds and abilities through the same curriculum at the same time, and traditional evaluation and feedback techniques that insist on rating and ranking children’s work.

A lot of Dr. Dweck’s research was on the impact of social interactions in this process, that is, on how teachers, parents and others spoke with students about their work and effort. She believes that the language that is used and the way the evaluations and feedback are framed have a significant impact on children’s beliefs about their abilities. While this is important and makes sense, it is only a single dimension in a kaleidoscope of factors that contribute to a student’s self image.

What the research that questions the efficacy of Dr. Dweck’s theory is really showing is that the methods for instilling the Growth Mindset into students is still in development and needs more time and research as well as a broadening of its focus to include the other factors that contribute to a child’s self image, something I think most if not all researchers would acknowledge. What I would very much like to see is some research on the way the Montessori method, with its emphasis on individualized learning, social emotional skills, effective adult-child interactions, and well-scaffolded, self-correcting materials, might by its very design help students develop a growth mindset.

That would be VERY interesting research indeed.