U is for Undoing Uncovers Misconceptions 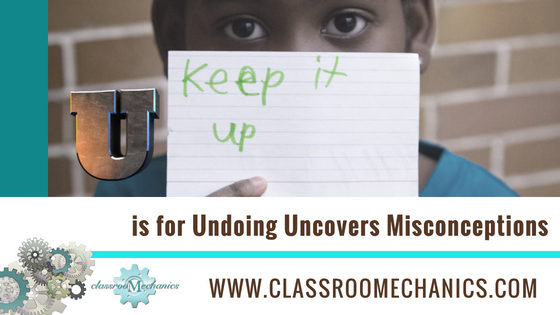 Undoing Errors May be Less Necessary in Montessori

Montessori environments are unique learning places in which to make mistakes. Our youngest learners rely on hands-on didactic materials in which they gain impressions of concepts including identifying mistakes when the error is manifest by an obvious control.

The built-in “Control of Error” in the Montessori materials accomplishes this throughout the curriculum.  For example, when the next longest red rod is shorter rather than longer than the one before, the child discerns the error and self-corrects. This communicates to them that they need to try again with a different approach.  Not only does this help the child recognize their misunderstanding and deepen their learning, it teaches them perseverance and problem solving skills that will be useful in a variety of situations. The materials provide specific, timely feedback to the learner and the danger of acquiring a misconception of dimension diminishes.

Sometimes undoing a misconception in learning isn’t as easy as giving the correct answer.  Sometimes it requires analyzing the root of the mistake and replacing it with a new paradigm.

Yet what about errors in learning when the concept is more abstract or the learning relies on a series of procedures to understand?  For example, undoing a student’s previously acquired habit of placing a decimal point before a whole number when learning decimals requires a series of analyzing their procedures with the material, observing whether there’s a fundamental hiccup in understanding place value, or whether pulling out a number line would undo their faulty idea.

Undoing mistaken ideas seems daunting yet researchers have uncovered several strategies that facilitate in guiding the learner towards accuracy.

Once the mistaken idea is identified, it’s essential to replace this mistake with a new procedure or habit, essentially undoing it!  For instance, I remember an independent learner in my upper elementary community that delved into the lesson on finding the root of a binomial number using the beboard.  He was presented a formal lesson, then he worked through a series of problems on his own. Later that week when checking his math journal, I discovered the same mistake on every problem.  I knew undoing his misperceptions would require my observing his procedures with the pegboard and replacing his faulty habit with an effective one. My mistake was allowing this habit to become engrained; closer observation on my part may have skirted the need for undoing his learning.

Analyze procedures with materials to identify root cause of misconception

As this demonstrates, one of the advantages of the Montessori method is that it is designed to develop several skills in any given context, including making mistakes!  What undoing strategy are you going to practice with your students?