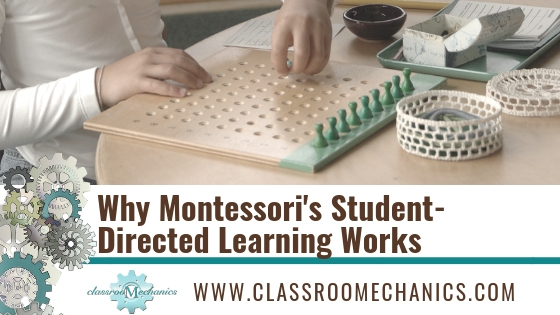 When adults hear that Montessori classrooms allow children to choose their own work, that they use student directed learning, or in other words, the teacher “follows the child,” it creates a lot of concern. They assume that children are allowed to do whatever they want, and they fear that no academics will be chosen, that kids will spend all day playing and avoid the challenging school work that is needed to become an educated adult.

The Source of the Concern

When I reflect back on my own time at school in regimented classrooms with the “sage on the stage” style of instruction, I recall my own frustration and boredom and the strong desire to just get to recess where my friends and I could do whatever we wanted, which was anything that wasn’t the academics we had just endured. This experience of school was not unique, and I empathize with adult concerns about letting kids have the freedom to choose what they do.

While the Montessori method is a style of student directed learning that provides children the freedom to choose what to work on and teacher’s do, in fact, follow a child’s interests, this freedom is constrained within the context of a prepared environment that has a limited number of prescribed choices tailored to a student’s stage of development. The teacher, who is familiar with the child’s abilities, their stage of progress within the curriculum, and their interests, acts as a guide who adeptly steers a child toward a range of choices that will move them along a path to mastery in their chosen subject of interest. The real genius, however, lies in several psychological elements of the Montessori method that provide inherent appeal to those limited choices.

By utilizing the intrinsic motivators of not overwhelming the mind, the desire for mastery, the social element of wanting to be like their friends and older children, and the appeal of beauty and order, the Montessori method’s approach to student directed learning makes a narrow set of options appealing enough that children will happily choose from within them.

Limited Choices Are Easier for the Mind

Psychological research has shown that limiting choices makes it more likely that the brain will make a choice at all. Having too many things to choose from overwhelms the brain’s limited processing ability with a large number of options to assess, and in the face of this daunting task, it freezes up and often won’t make a decision. Reducing the number of choices insures that the mind is not overwhelmed into paralysis. The narrow band of options offered within the Montessori curriculum provides children with enough freedom to give them a since of agency and autonomy and spark their intrinsic motivation, but remains within the bounds of appropriate academic material that insures they will get a good education.

Curiosity and the Desire for Mastery are Intrinsically Motivating 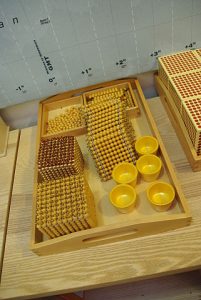 Second, the curriculum leverages a key intrinsic motivator, that of gaining a sense of mastery or competence with a given subject. One of the beauties of the Montessori materials is that they were created to isolate specific parts of learning so a student can progress from basic, concrete skills to increasingly more complex, abstract skills. Each new part of the curriculum is intended to be just enough more challenging than the last that it stretches the child to progress, but is not so challenging as to cause frustration and make them shut down. By scaffolding the curriculum in this way, a child is continuously challenged to improve their abilities within their zone of proximal development.

Think about how video games become increasingly more difficult with new moves and skills that need to be learned in order to move to the next level. In a video game, the player gets to try over and over until they succeed in getting to the next level, and we all know how motivated children are to play video games. Similarly, Montessori materials by design let children work with a material until they learn it. Since the materials are self-correcting, or in other words it is readily apparent when something is not right (e.g. the puzzle piece doesn’t fit), the children know when they are successful or when they need to try something new.

From the time they are babies, children learn naturally through this type of experimentation. They try different things and witness the cause and effect that their actions have on the world. Through her astute observations, Montessori harnessed this innate method of learning and captured it in the materials that are such an integral part of the method.

The sense of mastery the child develops as they work with the materials and come to be proficient at them gives them a strong sense of achievement and agency, which intrinsically motivates them to want to continue their progress to the next level. This in turn, intrinsically keeps their choices WITHIN the curriculum and again helps to insure they will receive a good education.

A third thing that makes the limited choices sufficiently appealing is the social factor involved. A Montessori classroom is a multi-age environment, so a child sees older children as well as their friends doing various kinds of work, which naturally makes them want to try it themselves. Younger children always want to do what the ‘big” kids are doing or test themselves against their peers. When they see other students, particularly those who are older, doing a particularly activity, it makes those things more appealing as they see their own next stage of development. So again, a subtle element of the Montessori classroom enhances the appeal of the limited choices, and intrinsically motivates children to WANT to work within the limits of the curriculum.

Finally, the materials themselves are aesthetically appealing by being well designed and made. The curriculum materials in a Montessori classroom have elements that appeal to a child’s sense of beauty and order. Curriculum items are made from materials that are naturally appealing, like wood, glass, or metal. They are nicely finished and sturdy. Together, these things create a sense of beauty and order that is intrinsically pleasing to the senses. For example, one material teaches the parts of a tree by isolating them into pieces of a puzzle. The puzzle is made of nicely finished hardwood with knobs for grasping and manipulating the pieces.

When one understands that the Montessori method’s style of student directed learning is actually a freedom within limits, and that there are subtle psychological forces at play to enhance the appeal of those choices, adults can rest assured that “following the child” does not mean a free-for-all in which children are at risk of not learning the basics, but in fact it is way to teach them a sense of agency and achievement that sets them up to be lifelong learners.