Examining My Approach to Holidays 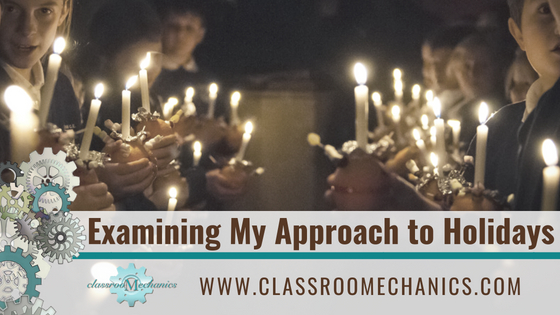 Having grown up in a homogenous, predominantly white middle-class area of a very white state, my memories of diversity in my schools is limited to a few differently-abled kids, maybe a student or two of Asian heritage, a Jewish kid, and a few freckled redheads like me.  From Kindergarten on through my freshman year in high school, my school celebrated the classic bank holidays starting with Halloween on through to Easter. Some of those holidays were celebrated with crafts and food and decorations, and some of them were recognized by the coveted day or days off of school.

As a member of the dominant Anglo-Protestant culture, I had the advantage of my school culture celebrating exactly what my family celebrated at home.  That privilege also shielded me from questioning this practice until I was an exchange student in high school and I experienced firsthand that what humans celebrate is a reflection of their social identity.  This became a recurring theme as I entered college and began to study literature and art by people from the global majority.   As this idea of how visible and invisible identifiers allow for certain rights in our society, and how other identifiers relegated entire groups of our society to limited resources and opportunities began to percolate, I began to wake up.

Not long after college, as a three to six Montessori guide attempting to celebrate the holidays important to my student’s families, I began to question whether I was representing the children’s cultures authentically.  I began to ponder whether this parade of holidays truly served to nurture or mute each of my students self- and group- identities.  I also began to question the disruption I felt was happening in our day to accommodate waves of holiday celebrations was truly in the best interest of my students.

As a novice Montessori guide leading a large group of preschoolers whose families attended the nearby university and hailed from six continents, I couldn’t have been in a better community to put some of my questions into critical action.    With guidance from two different books, Celebrate! An Anti-Bias Guide to Enjoying Holidays in Early Childhood Programs and Anti-Bias Curriculum: Tools for Empowering Children I began what has now been a several decades long study of how holidays are an expression of human identities.

Learning about other home cultures and cultivating a shared understanding of what is important to other people is part of the recipe that creates a community consciousness. To only celebrate the bank calendar holidays means omitting representation of parts our community and marginalizes individual identities.   To honor that which is important to another human cultivates empathy, nurtures an accepting global awareness, and builds a critical consciousness necessary in a fair and just world.

My fascination with human values expressed in holiday celebrations have been further piqued by attending a Balinese Mouse Cremation ceremony, dodging buckets of water for days during the Buddhist new year Songkran, dancing the forro during the June Festival in Brazil, learning about Ramadan in Egypt, and even celebrating our family holidays in a country that doesn’t (think Christmas in India).

These experiences are grand for storytelling and as a jumping off base they motivate me to do my homework before going to the families of my students.  When I began to approach my student’s parents asking for their engagement in this process, I also began to see how taking the time to do some homework before the conversation about a family’s religion or heritage and learning a bit about the holiday in advance was respectful and provided conversation starters.  Families were more apt to pitch in and share something of the holidays they enjoyed when I took an informed interest.

In just a few years, our small community had meaningful experiences recognizing both the calendar holidays expected of the school, in addition to a wide variety of subdominant holidays.  Children learned new words describing the values Kwanzaa candles represent, they threw beans to bring in the spring during the Japanese festival of Setsubun, a Chinese-American grandmother showed children how to build a pyramid of oranges for Chinese New Year, and we all remember the day an elder from the local Salish tribe came to share his legacy of love for cedar trees.

That first group of children that experienced my epiphany of adopting a culturally relevant lens are now grown and maybe have children of their own.  They likely don’t even know that the hidden curriculum in their preschool years was designed and delivered with the intent of setting the stage for inclusivity and acceptance.  They may not recognize that their global understanding influences how they see themselves and others.

My fascination with culture and curiosity about the world has influenced my Montessori practices and gave me pause before attempting to recognize holidays important to my student’s families.  Today, I’ve been able to reflect upon these experiences and have developed a professional development workshop in which I share a series of principles such as “Do Your Homework” and “Equity Over Equality” and a tool to measure representation that assists school communities in examining the lens with which they approach holidays.

My hope is to generate critical dialogues about how school culture can amplify or humiliate a student through their hidden holiday curriculum.