Pressing the Reset Button: In Support of Unschooling 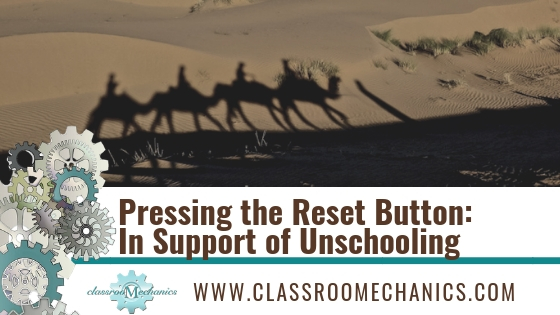 Unschooling is a rare topic to be promoted by a professional educator; yet after you hear my tale as a mother who happens to be an educator, maybe you’ll see unschooling in a new light.

I recently had the opportunity many people hope for in life: a do-over.

Four years and a few months ago, my husband, our sixteen year old daughter, and I began an adventure that challenged each of us in more ways that we could have imagined.  Not all of it good. But usually, transformative experiences aren’t all good.

A Context for Unschooling

I’ll have to back up a bit in my story to help it make more sense, because on the surface, it would seem my husband and I were reckless with our decision to leave the country, but I hope you can try to put yourself for a moment in our shoes as your hear our tale.

Our story begins in late July, 2012.  After vacationing for 3 weeks at our family camp in the Adirondacks in upstate New York, we returned to our Redmond, Washington home to find an unusual dampness throughout the house.

Over the course of the week we discovered a hot water leak in the crawl space under the house had created an entire ecosystem of mold.  The next 24 hours was a nightmare as we were told to evacuate with any belongings that survived the insidious creep of mold and the house would have to be professionally cleaned before we could reenter, likely months later, if ever.

The reality of losing the floor of our entire house and most everything that was on the floor began to sink in.  When our homeowners insurance refused to pay a dime (there was a clause that any leak over 2 weeks old was considered negligence even though we wouldn’t have known it was happening until the water bill arrived a week after our return), we shifted our perspective and knew we had to dip into our “rainy day funds” for the storm that had occurred under our home and in our lives.

We’ve never been so close to homelessness. Luckily for us, we had friends-are-family nearby where we could couch surf. It’s hard to describe the complexity of feelings when faced simultaneously with despair and gratitude.

Unfortunately, this was just the beginning of what my family has dubbed, “A Series of Unfortunate Events” and was the catalyst for us dramatically shaking up our lives and embrace unschooling.

Our daughter started high school and puberty the month we became couch surfers. Her newly constructed school scheduled to be ready still had six months of construction to complete, so she was displaced from her home at the same time her 300 student school squatted space in a local large high school already housing 2,500 students.  As a magnet STEM high school with high academic rigor, her placement in five Advanced Placement classes as a freshman was untenable. To say the least, this was not a great start for her high school years.

A month later a dear friend died from a freak latent health issue.  The next month, my father-in-law was diagnosed with terminal brain cancer.

As you can imagine, with all the turmoil and trauma, our daughter’s school performance began to slip as did her mental health.  Her dad and I were working full time and in every spare moment, we were rebuilding our home: he learned to plumb, run electrical lines, and build walls and I became our designer/project manager and learned how to tile walls and floors.  My husband also began a regular commute flying 3,000 miles round-trip to check in on his parents as they battled to stretch his dad’s life expectancy.

Six months after we left our home, we were able to move back in, but by this time, the internal damage to our psyches had been done.

Unschooling as an Alternative

Now if you have ever met Aaron or I, you’d know we’re not very “normal”.  Our world-view and chosen path has always been a bit alternative. We’ve been traveling the world since we were young – he with grandparents that lived in Europe, and me living overseas for a year as an exchange student. While not wealthy by any means, our frugal ways enabled us to travel extensively.  Additionally, we  sought educational experiences for our daughter that eschewed what was expected and instead was in alignment with what we knew about her and optimal learning environments (e.g. Montessori).

These experiences helped form an understanding that sometimes it is external forces that are a catalyst for internal transformation, and it is often how your view these forces that makes the difference in your journey through life.

A year after discovering the leak, our daughter was not being served well by her school and we decided at that point that we needed to embrace some kind of a “reboot”, a shake up of our place and mindset.  With me as an educator and him as a librarian, we would not have anticipated that this transformation would involve unschooling.

From that day forward in November of 2013, our lives were filled with the possibilities of how we could actualize our happiness, how we could harness our agency to become our best selves.  With my father-in-law dying six months after his scheduled retirement, and our friend dying in his 50’s, we knew we were the only ones that could fulfill our own dreams.

Aaron and I stepped out of our healthy careers and resigned, and after giving away most of our belongings that didn’t fit in our 5’ X 10’ storage unit, we sold our “new” house  for cash the day it went on the market. We drove away from our lives on September 2, 2014, and hit the road across the southwestern United States before claiming our “bought on the internet” 18’ motor home outside Amsterdam, the Netherlands.

For seven months, we healed some of our wounds by connecting as a family of three in “Charlie”, what our daughter called the “tin can”.  After exploring the people and lands from the north to southern Spain, we crossed the Mediterranean to Morocco where we spent three months over the winter.

Our idea of roadschooling became unschooling which in hindsight is all our daughter could do.  That she was with us was an act of courage in itself and enough for the circumstances. Our time connecting on a whole new level became precious as we saw her regain her strength to return to schooling, a commitment to complete high school, and her spirit stay intact.

After seven months together in our “tin can”, she flew back to the United States to live with a willing family member and go on to excel at an online high school.

Her dad and I continued on as we do so today, reinventing our careers while embracing our location independent nomadic lifestyle exploring lands remote.

Unschooling isn’t something we intentionally thought about nor implemented, yet the outcome is that our bright, passionate learner of a child has grown to embrace her own agency.  She has moved forward and realizes what she seeks is within her power. Unschooling was our unexpected and unsustained path for our child and I am grateful for the outcome in all our lives.

From this experience, I have formulated two distinct mottoes for my life: to be open to the possibilities both within and without, and to question assumptions.