I is for Imaginative Play Ignites Self-Control 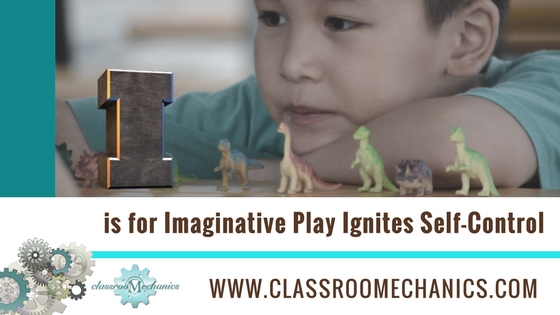 Imaginative Play is at Work in Montessori Environments

Montessori pedagogy is pretty clear in recognizing that pretend play is at work in the young child as evidenced by the common occurrence of practical life basic exercises used as “tea time”, or the knobbed cylinders that become a “family of cats”, or the bead chains being worn as a golden necklace.  Yet Montessori practitioners wait until the second plane of development, around six years of age, to use the child’s imagination as a tool for learning as the first plane child does not yet understand the difference between real and pretend.

Child development theorists have hypothesized about the impact of imaginative play on children’s development for years: Sigmund Freud thought pretend play reduced stress in children, while Lev Vygotsky thought it developed symbolic abilities.  Other pedagogues have hypothesized that play allows children to work out real-life problems in a safe, make-believe space.

This is where Dr. Angeline Lillard of Montessori: The Science Behind the Genius fame sets us straight.  In her research paper The Impact of Pretend Play on Children’s Development written in 2013, Dr. Lillard does not validate the hypotheses outlined above, rather, her research points to the idea that imaginative play supports all those hypotheses and more.  Like the function of the mouth is to talk, eat, sing, taste, breathe, and more, imaginative play functions on many levels of a child’s development.

“Imagination is the real substance of our intelligence. All theory and all progress comes from the mind’s capacity to reconstruct something.” (Maria Montessori, The Child, Society and the World p.48).

Before I go any further, let’s take a look at the famous Stanford marshmallow study that measured delayed gratification in children. Researchers gave children a marshmallow and told them that if they waited a certain amount of time, they would get two, but if they ate it, they didn’t get the second one.

As it relates to the imagination and self-control, when children were told to imagine just how tasty the marshmallow is, the child’s resistance decreased.  And when told to imagine it was a photo of a marshmallow, the children’s ability to wait increased.  This shows a direct correlation between delayed gratification, an executive functioning skill, and imagination.

How does this play out in Montessori classrooms?  When it comes to self-control, Montessori practitioners often employ role-playing to highlight classroom norms and grace and courtesy.  Role playing taps into the student’s ability to imagine the possibilities which they can then incorporate into their own behavior.  In other words, their imaginative play ignites their self-control!

Additionally, In 6-12 environments, children are exposed to rich stories that set the stage for all areas of the curriculum.  These stories are told year after year and provide the student with the spark of an idea they can visualize, furthering their understanding of the topic at hand whether it be the evolutionary adaptation to a specific environment or the handwork of the earliest humans.

I distinctly remember an Upper Elementary student complaining about having to place all the pegs onto the pegboard to work out a trinomial equation, giving us both the opportunity to talk about the power of being able to take a picture with their mind so they can lean on this visualization down the road when meeting an equation abstractly.  This ability to create a visual representation is yet another nuance of our brain’s ability to imagine and my student was further empowered with the metacognizance of this super power.

So how do we nurture the imagination as a learning strategy in Montessori environments?

So now that you know more about imagination and how it can ignite self-control, what ideas have you come up with to emphasize imagination in your realm?

B is for Belonging Bonds Learning
December 24, 2021

L is for Listening and Learning Surge Synergy
March 25, 2018
Go to Top