N is for Norms Enable Learning 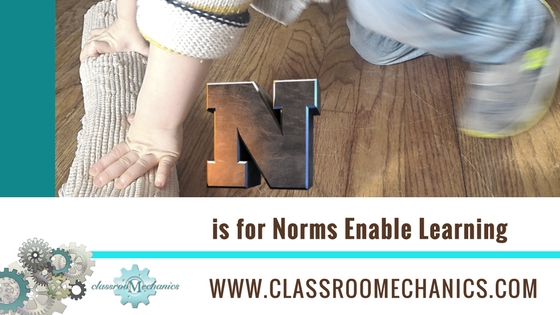 Norms are the unwritten rules and behaviors that govern social settings and interactions, such as raising your hand to get the teacher’s attention.  Establishing classroom norms that support learning can make an environment more effective for teaching.

Norms Are Not Normalization

Norms do not regulate behavior, they regulate conduct.  For example, the normative behavior of walking around a work rug differs than the conduct of choosing to walk around a room full of work rugs without stepping on one.  Breaking such a norm would yield a social sanction. In Montessori we might see this as the overarching ideal of “respect”, yet respect is actually a value, and while founded in values, norms are prescriptions for conduct.

Norms seem like a given in a Montessori environment as practitioners strive for a state of being Dr. Montessori called “normalization”.   Guides often describe a well-functioning group of children as “normalized”, yet while norms can lead to normalization, they are not actually equivalent in meaning.  Normalization is more of a process of gaining self-regulation and peace and norms are more of an expectation for certain behaviors.

Most humans want to fit into their respective groups.  To feel a sense of belonging and significance is one of the most fundamental human needs.  As sociologist Erving Goffman identified in his seminal work, The Presentation of Self in Everyday Life,  “The rule of behavior that seems common to all situations . . . is the rule obliging participants to ‘fit in’.”

These rules for behavior are often conveyed as, “Respect for Self, Others, and the Environment” in Montessori environments and form the foundation for compliance for a smooth running classroom.  What would it look like if instead of laying out the “Classroom Rules”, we talk about what we value (respect), how we conduct ourselves (norms), and what does it look like (behaviors). For instance, in an elementary setting early in the school year, moderate a class meeting where students talk about the kind of learning environment they expect.  These expectations are the norm, can be upheld by a common value, and executed with how everyone acts. Giving specific language to these qualities assists in students actualizing what is expected and educators leverage to guide them back to the norm with dignity.

Not so long ago I heard from a former student that moved to a new state and new school system that the first months of math class was excruciating.  The student had come from a Montessori elementary where math was self-selected, worked on individually or small groups, and corrected either by the materials or by the teacher.  The student’s new school didn’t require students raise their hand to answer a question, instead, the expectation was to participate in a dialogue giving and taking turns and exploring the problem. It wasn’t enough to give the right answer, the students were expected to be able to articulate how they got there and defend their methodology.  My former student, without knowledge of this class norm, didn’t know how to conduct themselves appropriately and spent most of their time fretting about their behavior than the learning.

In this scenario, if the student new to the learning community had been given a clearer picture of class norms of sharing, their math confidence might have soared! Yet without clear communication or collective adoption of the norms, this same student floundered, losing time to “enculturation” of the norms.  Fortunately, when explicitly given the information about the norms, the student gained confidence and skills and was better able to participate.

Role play desirable and undesirable norms with students utilizing the language of what you value as a community.

Now that you have new insight as to norms and how they can affect your learners, what are you going to do to amplify norms to enable learning?