O is for Observation Occurs Naturally 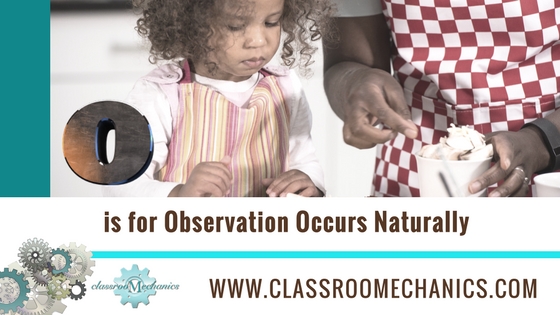 Learning by watching others is called observational learning, something every Montessori practitioner experiences every day!

People can often learn a lot just by watching others perform a task.  In fact, this kind of learning is what has propelled mankind for millennia and is thought to be behind the concept of mirror neurons.  Mirror neurons are specialized brain cells that help you learn something just as well by watching another as doing it yourself and is considered to be “embodied simulation”.  https://www.ncbi.nlm.nih.gov/pmc/articles/PMC3898692/

Observational learning works better when a student identifies in some way with the person doing the learning.  For instance, when a young learner hears a language unfamiliar to them from a real person speaking than someone on a video, they pay closer attention and retain more vocabulary.  There is also evidence that when students connect with certain identifiers such as race or ethnicity, their ability to learn through observation is enhanced.

When we first think of observation in Montessori, the role of the adult comes to mind; however, the science behind observation as a strategy for learning and at play in Montessori environments is not often studied by guides.

Observation can reveal the interrelation of the various elements of a work and the rules used to manipulate it.  The Montessori Method incorporates this through students watching a teacher give a lesson, and then engaging with the materials themselves.  In addition, older students often mentor younger students when they are learning a new work. By leveraging this ancient method of learning, the Montessori method takes advantage of some of our innate capacity to understand something by watching it being performed.

Additionally, the mixed age classrooms promote observational learning as there is a greater range of abilities and students learn better from each other than the guides.

“The main thing is that the groups should contain different ages, because it has great influence on the cultural development of the child. This is obtained by the relations of the children among themselves. You cannot imagine how well a young child learns from an older child; how patient the older child is with the difficulties of the younger.”   —Maria Montessori

How children adopt certain behaviors has long been thought to be behavioral, acquired solely by what social cognitive theory psychologist Albert Bandura identified as the nurture part of this nature vs. nurture question about development.  He postulated that children encode behaviors by observing those around them. The discovery of mirror neurons, or cubelli neuron, has bridged this ages long debate and given scientific credibility to the behavior.

Considering how observational learning is an easily accessed scientifically-proven strategy for learning, how are you going to emphasize it in your daily practice?