Self-Regulation: Who Needs It? 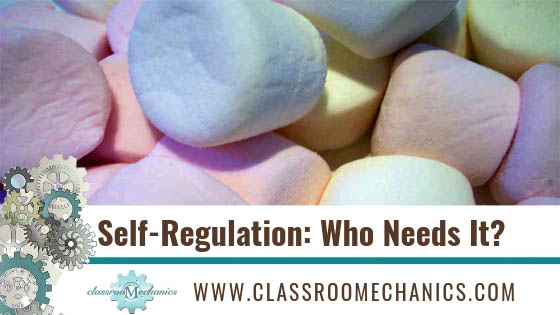 “Famed impulse control ‘Marshmallow Test’ fails in new research” reads the headline.  On June 1, 2018, a number of media sources broadcast the story that the famed Marshmallow Test was flawed, and went on to report that:

“The results, according to the researchers who carried out the new study, means that parents, schools and nurseries could be wasting time if they try to coach their children to delay gratification.” (1)

For those that may not be familiar with it, the Marshmallow Test was a series of psychology research experiments that began in the 1960s.  It allegedly tests the ability of children 3-5 years old to delay gratification, or self regulate. The researchers followed up with the subjects at various points in their lives, both as teens and as middle-aged adults to assess their “success.” When the follow up research was reported, it seemed that the ability to self regulate was correlated with (not necessarily the cause of) better life outcomes.

The research became a cultural meme that parents fretted over for decades, worrying that their children might not be able to pass the test and would be doomed to the ranks of lesser achievers.  It also spawned a variety of strategies to try and help children improve their ability to delay gratification.

Then in the follow up research cited above, which made use of larger pools of subjects from a broader swath of the socioeconomic spectrum, the original research was deemed flawed. Suddenly, young children’s power to delay gratification were deemed irrelevant.  The media reported that the original research only demonstrates that children from affluent backgrounds are better able to self regulate than their less affluent peers, and that affluence is what’s really behind children’s success in the Marshmallow Test.

As is typical with the media in its reporting of research, they have sensationalized the results and created an all-or-nothing dichotomy based on a specific study that goes against a larger body of research. As a result, they have left those of us in the general public scratching our heads about what to believe.

The larger body of research that encompasses this “marshmallow” research revolves around what is called executive function.  The term refers to a constellation of skills that involve working memory, cognitive flexibility, and self-control, including such abilities as paying attention, organizing, planning, prioritization, self-regulation, time management, task initiation and completion, emotional self-control and more.(2)

The broader executive function research does in fact show a strong correlation between the strength of these skills and later academic and life success. (3) Furthermore, the research shows that these skills can be developed.  So what does this tell us? That contrary to media pronouncements that “parents, schools and nurseries could be wasting time” trying to develop these skills, in fact it is a worthwhile pursuit, and furthermore, is very important.  It also tells us that if kids are not demonstrating good executive function, it likely means they have not had enough instruction and practice.

What have we Learned about Self-Regulation?

So, what does it mean to say that more affluent kids have better abilities to self regulate? Since the research says these traits can be developed, it means that their environments (home, school, etc) have given them more and better opportunities to learn and practice executive function skills.  Does the fact that affluent kids have better opportunities surprise anyone? It shouldn’t.

However, what this really all boils down to is that we as a society need to invest more heavily in making sure that EVERY CHILD gets the opportunity to cultivate executive function skills in pre-kindergarten and elementary programs that nurture their development.

What kind of program has demonstrated such efficacy you ask? Montessori of course. (4)