How I Overcame the Bad Habit of Saying “Good Job” 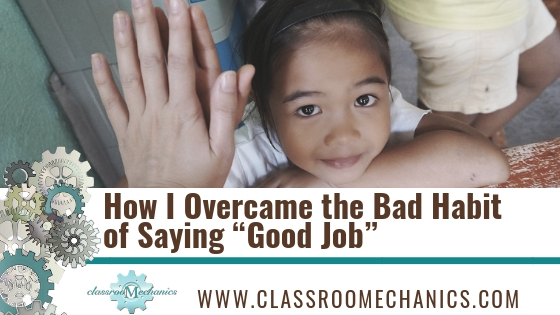 Twenty-seven years ago, I stepped into a Montessori classroom for the very first time.  The five year old boy that I was a nanny for forgot to collect the novel he was writing at school, so I parked my car and followed him inside to collect it from the 1970’s home converted into a school.

What greeted me was a light-filled room with small wooden furniture, framed artwork, and even a small living room replete with a tiny couch, armchairs, a coffee table, and side tables with lamps.  I couldn’t believe my senses as I had never seen such a beautiful environment for children. I didn’t really know what “Montessori” was, nor how it was that my wee charge could be so passionate about writing a novel.  He was just five for goodness sake, I wondered if he even knew how to write his letters!

You see, I’ve always loved being with children.  My first job was as a babysitter and I excelled at my job making sure the children had a wonderful time playing games, roughhousing, making crafts, and being silly. I rarely faced discipline issues as I basically avoided any conflicts whatsoever by keeping the children happy and occupied.  I saw myself as the ultimate cheerleader by pumping up my wards with praise and permissiveness. I thought their good behavior was motivated by my praise.

So that day when I walked into my first Montessori classroom, I was intrigued and downright curious about what I was seeing.  Fortunately, the Head of School happened to be walking through the classroom as we located my charge’s “novel” and my comment about the beauty of the classroom lead to an invitation to return the next day for an observation.  I didn’t really know what that meant, but I was game and readily accepted. What I didn’t anticipate, and now feel, that moment was a stroke of luck, and now I count this experience as pivotal in my life.

Several days after that first observation, I was invited to apply to be a classroom assistant for the following school year and lo- and behold, I got the job!

My previous years as a day camp counselor, babysitting, and even my full-time nanny position hadn’t prepared me at all for my new position assisting the seasoned Montessori guide. I had no idea of what the students did with the materials, how to help guide them, nor how to make sure the guide was getting what she needed from me.  Looking back, I can thank my lucky stars this beginning was graced with a profoundly grounded and kind Montessori guide who saw my potential and proactively guided me towards a path of learning.

When I think back to those first months in the classroom, I cringe thinking about how I had applied my “cheerleading” from babysitting to the students in the classroom.  Every time I witnessed something I thought amazing, from the 3 year olds that would put on their own shoes, to the four year olds that were constructing their first words with a wooden cut-out alphabet, to the five year olds doing multiplication in the thousands place, to the six year olds that were writing research reports on the class pets, I would insist on a high five and exclaim, “Good job!”

Setting the Stage for New Habits

What I became to understand through gentle guidance of my lead guide and some well-delivered phrasing by my colleagues, is that children really don’t need our praise.  I learned that the prepared Montessori environment cultivated the children’s internal motivation and they weren’t asking for my subjective commenting. Yet I continued to “good job” my way through the class.  It wasn’t until I heard the researcher Alfie Kohn and his book, Punished by Rewards at a regional Montessori conference did I truly pause and attempt to shift this egotistical habit.  In the years since, I’ve synthesized the reasons why to stop saying “Good job” in a handy infographic titled.  It is available for download along with another that has 5 alternatives to saying “Good job” if you sign up for our newsletter.

Who woulda thunk that such a simple phrase, “Good job,” would be so ingrained into my interactions that I would struggle so much in not saying it?!  I found I was internally berating myself every time that dreaded comment slipped through my lips. I needed to find a way to change the habit before my colleagues became weary and my job was at stake.  Little did I know then that this was the very best community for me to learn new habits. That mistakes were welcomed and my efforts to self-correct were applauded (internally, of course).

My motivation to change began to shift the more I learned about how external praises are a form of rewards and how rewards reduce motivation to continue whatever behavior it is that was being rewarded!  I found that my own efforts to change spurred me on to learn more; that the autonomy I had been allowed by my supervising teacher and colleagues actually encouraged me to improve my interactions with the students.  And finally, each time I actually refrained from praising and replaced it with silence or a smile or another phrase that encouraged rather than praised, I felt a great sense of satisfaction in noticing I was improving!  These conditions to internal motivation were confirmed by the work of Daniel Pink and highlighted in his book Drive: The Surprising Truth About What Motivates Us.

Noticing the purpose behind why not to use vacuous praise, the autonomy to make the mistakes, and my noticeable mastery set the stage for me to learn new habits.  The next stage of my transformation was much harder . . . how to actually stop saying “Good job”!

Sometime during those early months of year, my wise Head of School lent me a book by Dr. Montessori wherein she mentioned her rosary helped her gain mindfulness.  That got me thinking, if I were only more mindful about my usage of this superficial phrasing, I might be be able to kick this bad habit! So I set out to practice one phrase a week, and I would pause before every interaction with a child and decide whether to comment or not.  The first week, if I landed on needing to comment, I would use the phrase, “I noticed . . . “. The second week I added the phrase, “I see . . . “ to my growing repertoire and toolkit.

To my surprise, in just a few short weeks I had kicked the habit of high-fiving students and exclaiming, “Good job!” at every turn.  I found myself noticing that look of inner satisfaction on my students’ faces when they accomplished something challenging.  When they asked for praise, such as the child who asked whether her painting was beautiful, I found myself giving her specific feedback about the color or shape or story it was telling and this would further our interaction.

That’s my story about how I overcame the bad habit of saying “Good job”.  Yet the story doesn’t end there.

Fast forward about 15 years, when I was the lead guide training a new assistant to interact effectively with the children.

Only this time, the bad habit wasn’t saying “Good job”, the bad habit was the assistant patting children on the head.  The patting was without the child’s consent and clearly unwarranted. Worse, it was highly disruptive and several sensory sensitive children were beginning to avoid interacting with the assistant at all. The assistant was super well-meaning and I learned in our discussions that their family culture promoted touching, squeezing, holding, picking up, and patting children at the whim of the adult, not the child.

I channeled my own experience of overcoming undesirable classroom habits and first loaded up my eager assistant with information about what respect looks like with children starting with Dr. Montessori’s Decalogue.  I gave them the autonomy to make the mistakes and to harness their agency to make changes. And I noted for them when I witnessed interactions where they would ask for consent to hug a child or hold their hand which assisted them in noticing their growing mastery.

Then I remembered the story of Dr. Montessori’s rosary; without an actual rosary and the implications of its use in our private secular school, I had the assistant fill one pocket with a handful of beads instead.  Every time they touched a child without first gaining permission, they moved one bead from one pocket to their other pocket. At the end of the day, they’d note how many, and in just two weeks time, they noticed a measurable reduction in the number of times they needed to self-correct!

Setting the stage for authentic, internal motivation and replacing a bad habit with a mechanism to bring mindfulness to the habit are the keys to overcome undesirable and often unconscious behaviors that hinder optimal classroom learning.

Now how many beads do you need to fill your pocket to change your bad classroom habit?!